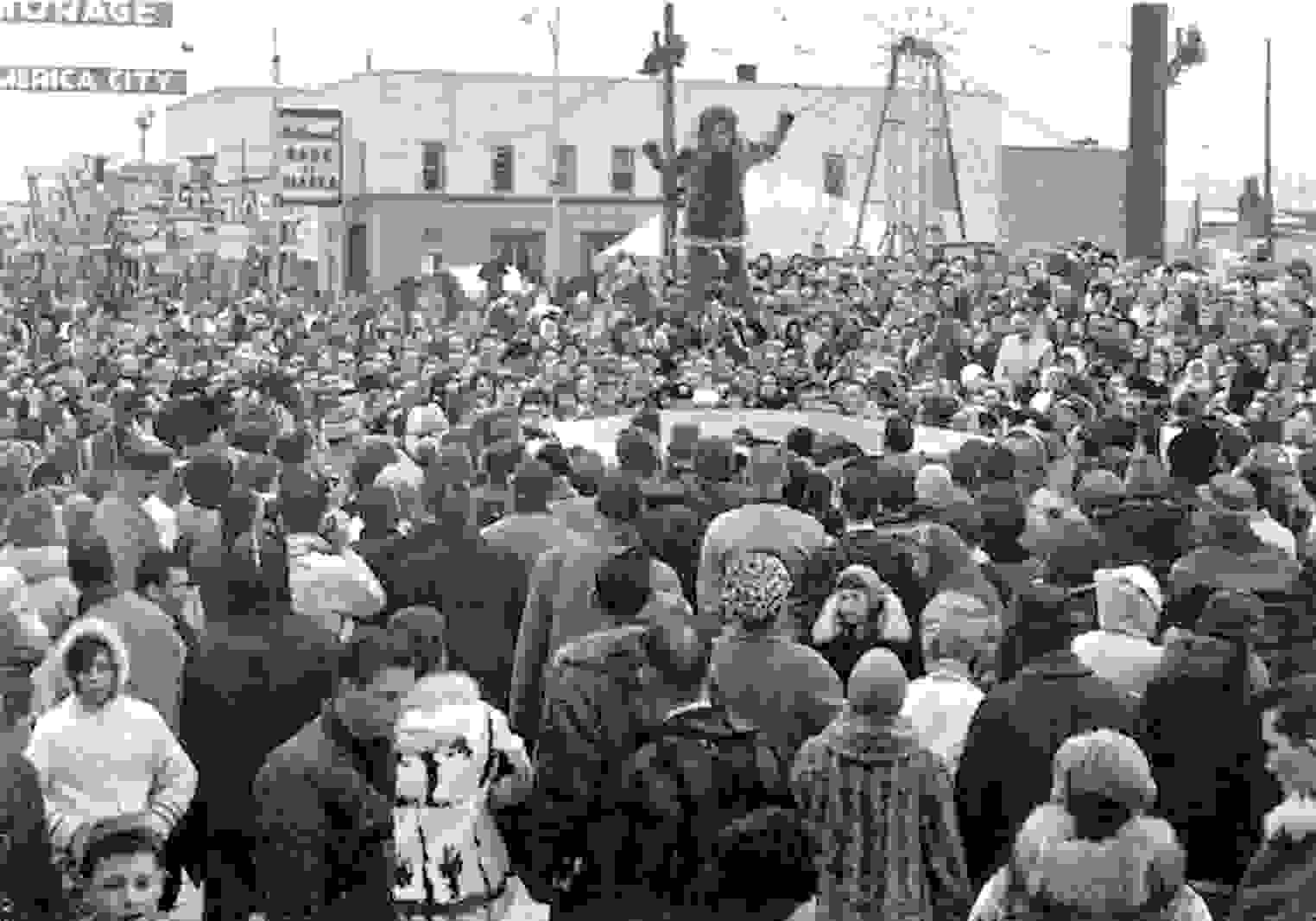 How it all Began


A trip to Fairbanks in 1934, to participate in that cities Ice Carnival and Dog Derby, gave Vern Johnson and his friends an idea.

Fur trappers and miners came into Anchorage every year during the month of February to sell their furs and other things.

So, what if there was some kind of fun gathering, like they had in Fairbanks, where everyone could take a break from the long winter and cabin fever?

To start things off in Anchorage, in 1935, Vern Johnson and his friends put together a community dance. It was well received.

And that was the beginning of the Anchorage Fur Rendezvous.

The following year, in 1936, Johnson put together the Winter Sports Tournament, a 3-day event held February 15, 16 and 17. Events included a children's dog sled race, a skiing contest, a hockey game, and a parade right down 4th Avenue. There was also a dance and a bone fire at what is now called the Park Strip.

Later, the name of the event was changed to the Fur Rendezvous, and it still takes place every February in Anchorage.

Today, Vern Johnson is considered the father of the Fur Rendezvous. 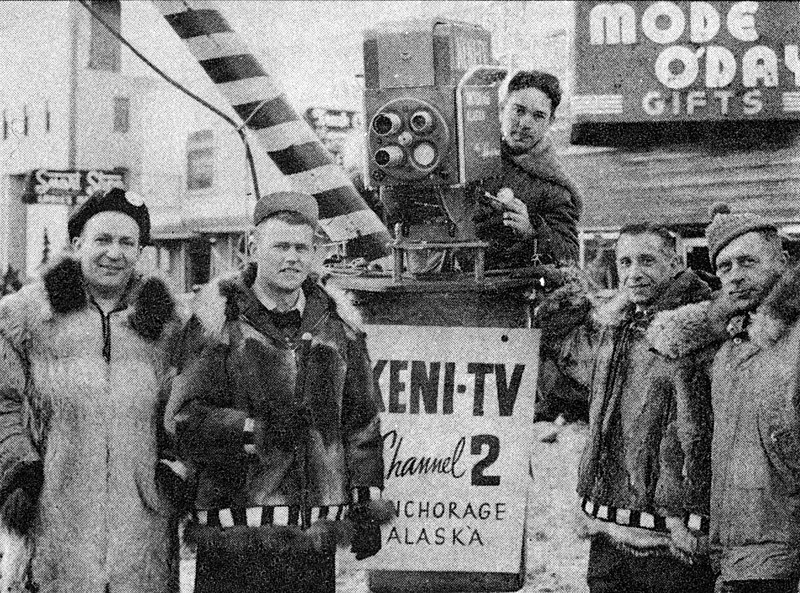 You could go into town to take in the Rondy, then head home to warm up while you watched the races on TV and cheered for your favorite musher.

Enjoy this vocal version and remember when.

What Are Your Anchorage Fur Rendezvous Memories?

The NBC western TV series Bonanza was on television from 1959 to 1973. Michael Landon, who played "Little Joe Cartwright" was on Bonanza, and was quite …

Back in 1965, I walked to downtown Anchorage to film the Fur Rendezvous parade and other Rondy activities with my new 8mm film camera. I was attending …

Marching
in the Fur Rondy Parade

If you were in a marching band in Anchorage's yearly February, Fun Rendezvous Parade, there were three things you always worried about. Would you slip …

Rainbow Girl Drill team Not rated yet
I lived on Fort Richardson and belong to the Rainbow Girls of Anchorage. We had a drill team, and we practiced in the hangers at Elmendorf. We marched …

Fur Rondy Corn Dogs Not rated yet
Yes! I loved my Fur Rondy corn dogs. I liked them best with ketchup. My husband Mike told me he liked his best with mustard. It was the grand opening …

My Mom Got Put in
the Rondy Jail Not rated yet
My first memory of the Fur Rendezvous was a little scary. I was about 5 years old when I experienced my first Fur Rondy. Dad was working, so mom took …

Anchorage's Winter Carnival Not rated yet
It All Started Back in 1935 By Mary J. Dougherty The first Anchorage Fur Rendezvous was February 15th through the 17th. Vern Johnson and … 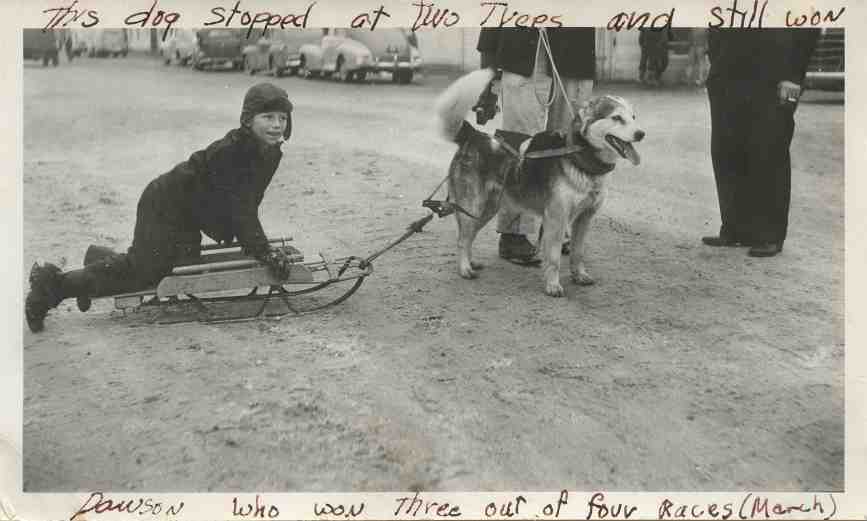 Rondy fun for all ages

Notice in the picture above, that the idea of kids and sled dogs being a part of the winter festival was still going strong in 1946.

Are you, your family

or friends in this film?

The name “Fur Rendezvous” came into being when fur trappers got together to sell their furs and kick up a little snow as a way to shake off the long winter in early Anchorage.

In Alaska, everyone knows that late February is time for Rondy fun.

Now, people from all over the world converge in Anchorage, Alaska for events like:

And much more fun, food, and games

Do you know anyone


Have you ever ridden a Ferris Wheel in the winter when it was below zero outside?

That's just one of the fun, and unique attractions Mike and Mary, the authors of Anchorage Memories.com remember enjoying.

One year Mike and his brother Tom and their band “The Matadors” played to a delighted crowd on the Melodrama stage during Rondy. Great fun.

And each year, Anchorage's popular 4th Avenue Theater played a movie to compliment the Fur Rendezvous.

And one year they screened a locally produced movie about an Iditarod dog sled team titled “Hot Foot to Nome.”


Mike of Anchorage Memories recalls getting out of school to enjoy the Fur Rendezvous.

“When we were teenagers, mom drove me, my sister Anna and brother Tom to downtown Anchorage during the Rendezvous, gave us each some spending money and told us where she would meet us later and to enjoy our day.

We would walk around, watch the dogs getting ready to race, go to the Carnival, or maybe even see a special movie at the 4th Avenue Theatre.

The Fur Rendezvous was a fun time for everyone. And we could also stay home (and stay warm) as we watched all the excitement of the sled dog races on KENI-TV channel 2.”


The Rondy dog sled race featured mushers from all over Alaska and the world.

One local favorite was dog sled musher, George Attla. In fact, he was so popular that his life story was made into a movie.

Take a look at this clip from the movie, featuring Buffy Sainte Marie singing the title song of the George Attla movie, “Spirit of the Wind”.

World War II and the 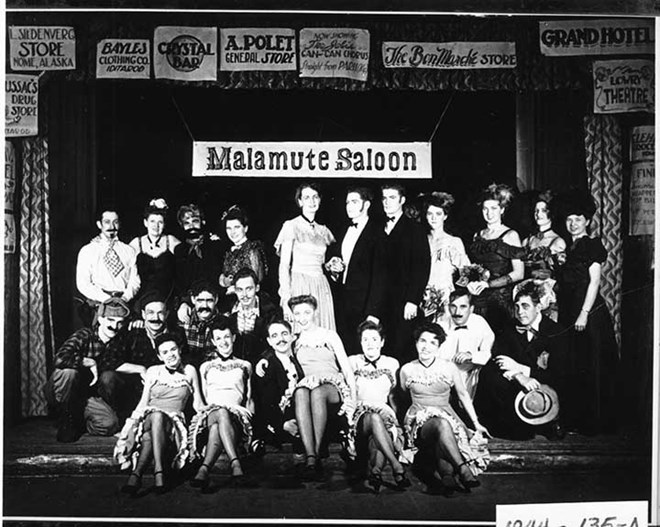 In the photo above:

Notice the advertisers listed above the show's cast.


In the 1940s, during the years of World War II, Anchorage did not have a Fur Rendezvous. And Anchorage residents were left without their favorite winter gathering.

But in 1943, Lorene Harrison (the Hat Box), who was very talented when it came to music and putting together shows, had an idea.

She decided that Anchorage still needed some fun, even if there was a war.

So, Harrison put together a show to provide the community with some homegrown entertainment.

It wasn't the Fur Rendezvous, but it had to do for the moment.

The show was, called “Bonanza Days” and it was presented at the Log Cabin USO.

Bonanza Days turned out to be a big hit and the show played to standing room only crowds.


In 1936, Vern Johnson and some friends had an idea for a winter gathering the community might enjoy.

In 2012, the Anchorage Fur Rendezvous Festival was selected as the number one Winter Carnival in the world, by National Geographic Traveler.

Now people from around the world come to Anchorage, Alaska each year to experience North America's number one winter carnival.

Alaska is a special place and the Fur Rendezvous is a great experience.