Learn how people survived the Anchorage Alaska Earthquake 1964, the biggest quake ever recorded in North America.

As you read the stories that follow, you'll meet people who were just children, teens, or adults living in Anchorage when the earthquake struck on an otherwise quiet afternoon.

And you'll learn what they experienced and how they survived.


The earth began to shake violently. It roared, and slammed the ground, ripping apart buildings, roads, and sidewalks.

Mike and Mary of Anchorage Memories are both survivors of the 1964 earthquake, and what they experienced, was horrifying and unreal.

“We were literally being shaken to the core of our being. And what we saw, felt, and heard will never leave us.”

When it was finally over, the world learned that the quake was a magnitude 9.2 and that it lasted an incredible 5-minutes.

One hundred thirty-nine people lost their lives and the tsunamis that followed hit British Columbia, Washington, Oregon, and Northern California.

Read the memories below for a first-hand look into this fantastic event as you experience it through the eyes of survivors who were living in Anchorage, when the 1964 Alaska earthquake struck.

Were you there too?

Do You Have A Story About the Anchorage Alaska Earthquake 1964?

I was in southern California during the 1964 Alaska earthquake, but I heard the following story told by a woman in the hard-hit area of Turnagain. …

I Survived
The 1964 Earthquake
Inside the 4th Avenue Theater

It was Good Friday, 1964. Our Dad dropped us off at the 4th Avenue Theater to see a Walt Disney movie. He was going to pick us up later when the movie …

I was a little over six years old at the time of the 1964 Alaska earthquake, so this is what I remember. We lived near Jewel lake. I don’t remember …

The Doctor got a Shot
in His Thumb

I was five years old when the 1964 Earthquake hit. My father, brothers, and sister were home. My brother was watching Fireball XL5 on TV. The countdown …

I was hosting the Buckaroo Show live at 5 from the KTVA studios on the first floor of the McKinley Building. The show featured cartoons, puppets, and …

Many of us who were older (as in 17) volunteered for Civil Defense duty after the 1964 Alaska earthquake. We were assigned to different projects over …

For you G.T. who I promised this to some time ago. And to you C.H because your post regarding the 1964 quake and PSTD really hit home for me and finally …

I was stationed at Elmendorf Air Force Base at the time of the 1964 Alaska earthquake. I was just outside the gate on Government Hill in a drug store …

When the 1964 Alaska earthquake first hit, my mom was in the kitchen making sloppy Joe's for dinner. The three of us were huddled around the television …

Our family was spared by the Grace of God! We lived in a single family house on a typical street in our neighborhood of “Turnagain By The Sea.” …

My older brother Norman and I were shopping downtown at JC Penney's Department store. At 5:36 p.m. and 14 seconds, panic swept over us. A big jolt. …

What does “Supermarionation” have to do with the 1964 Good Friday Earthquake in Anchorage? Right after the quake, one of the first questions all of …

We lived in a trailer court on Boniface road. The 1964 Alaska earthquake started as a dull roar and vibration as you expect when a jet flies over. …

The original… “Home Alone” I had turned 11 years old a couple of weeks before the Alaska earthquake in March 1964. My brother was 15. We lived in …

Ground fissures were opening up all around me as the earth began to shake more violently than ever before. I was 17 years old and suddenly, I knew …

I was 11 years old in 1964 and living with my parents in the Turnagain By The Sea residential area on Captain Cook Blvd. It was a snowy day, gray …

The 1964 Earthquake
was a
Shaking Experience Not rated yet
My sister and I were sitting together, watching our favorite TV show, Fireball XL5 at our home on 3900 Arctic Blvd. As I remember, there was some kind …

Ron Moore
1964 Earthquake Memories Not rated yet
Scotty Ferguson and yours truly were doing a 5:30 pm news-sports cast on KFQD. I had just finished the news and Scotty was doing sports in the studio …

I was 13
and my Little Brother was 10
We Recall the Quake Vividly Not rated yet
I've been asked to give our memory of March 27, 1964, earthquake at 5:36 PM. My brother and I have vivid recall. My name is Ron Dionne and my brother …

1964 Alaskan Earthquake
Memories Not rated yet
It was my husband's birthday, and I was cooking and had just placed his cake on the table. All of a sudden, things started shaking. The doors of …


An Incredible Story of Survival 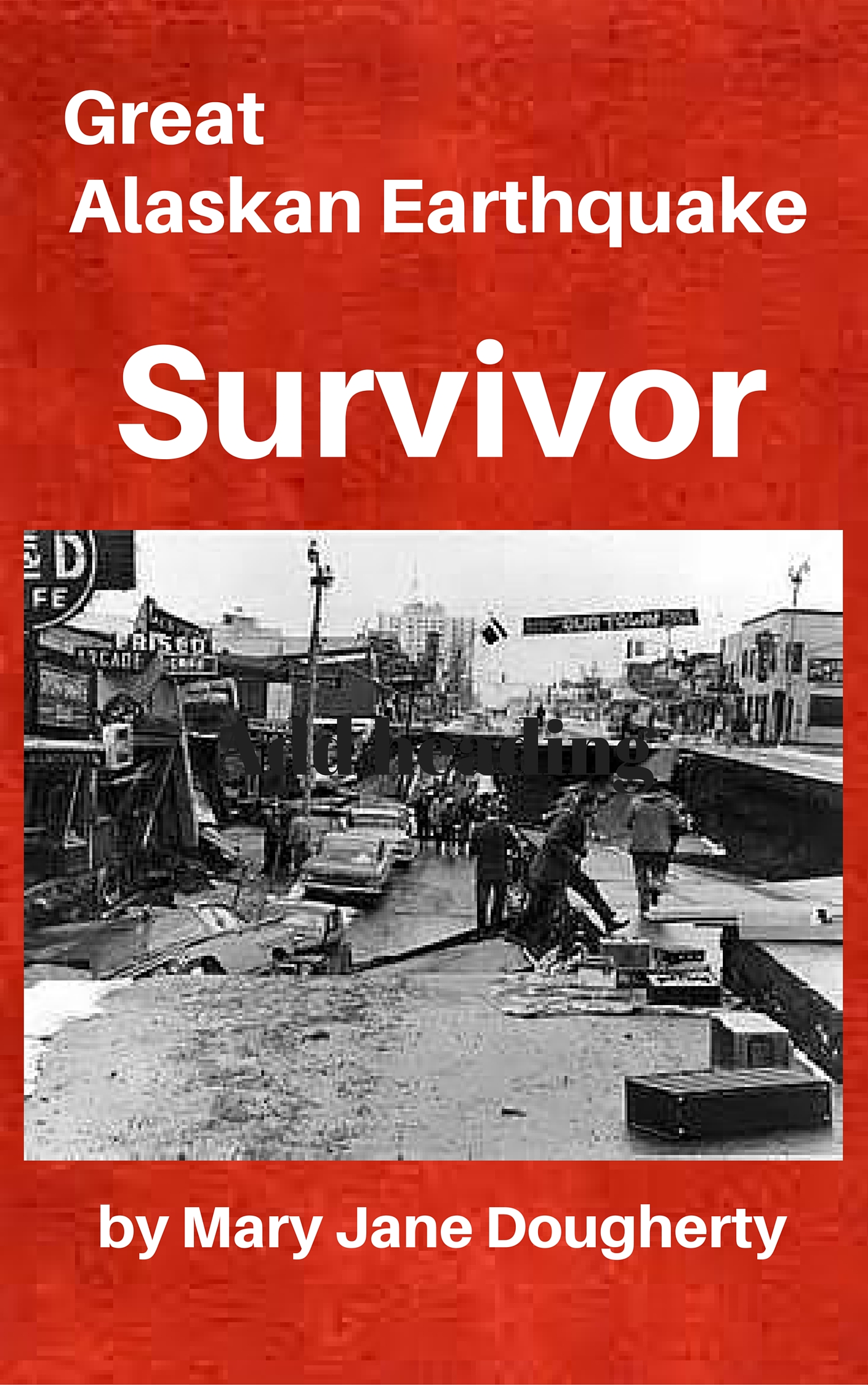 Mary of Anchorage Memories was a teenager when the quake hit.

The book she wrote captures her amazing story. 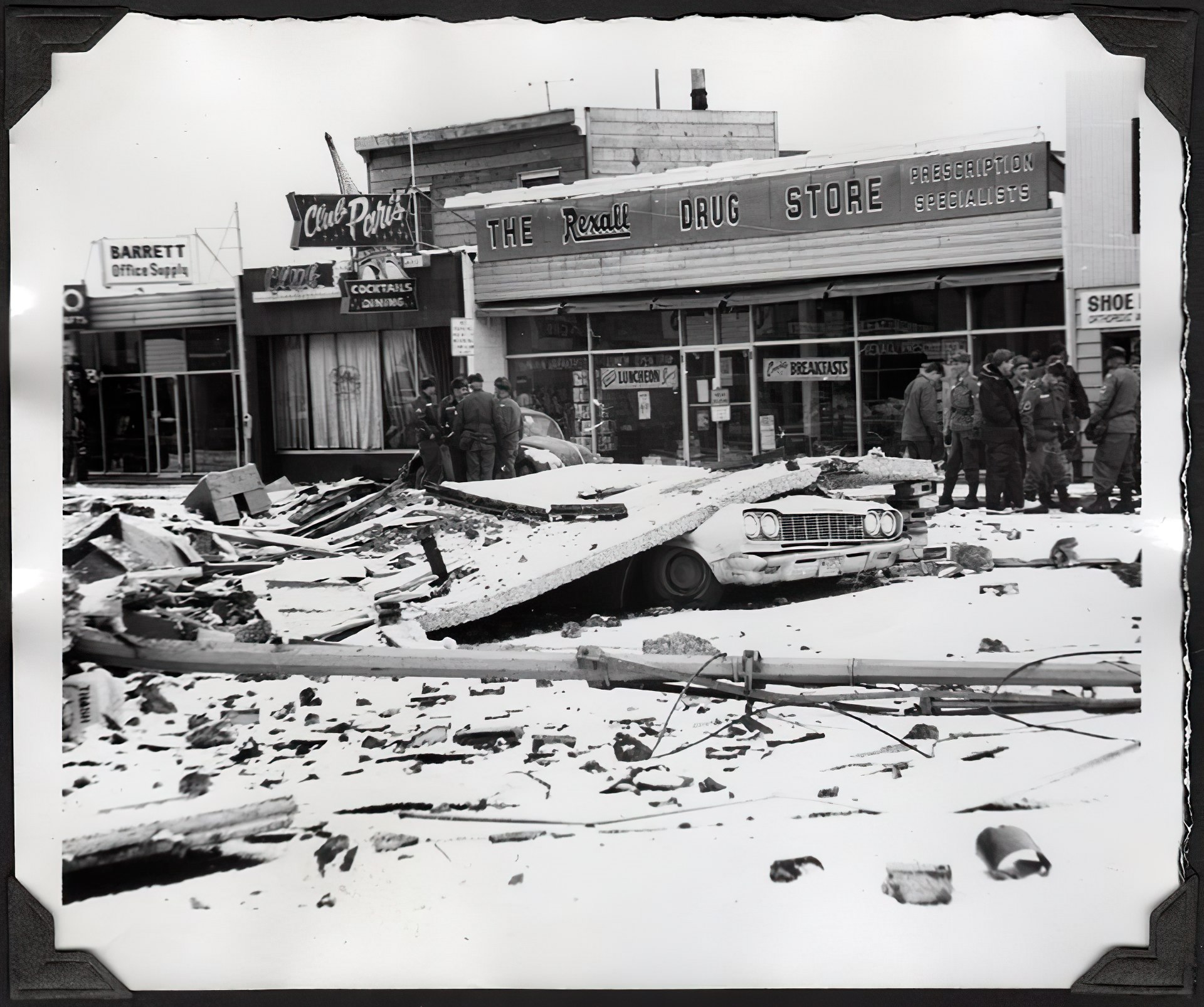 There is a story about a small boy who was separated from his family right in front of the Rexall Drug store (pictured above) after the quake.

In the confusion, and not knowing what to do, the shop owner placed the boy in the store's picture window where he could be seen. As a result, the boy, and his family were happily reunited. 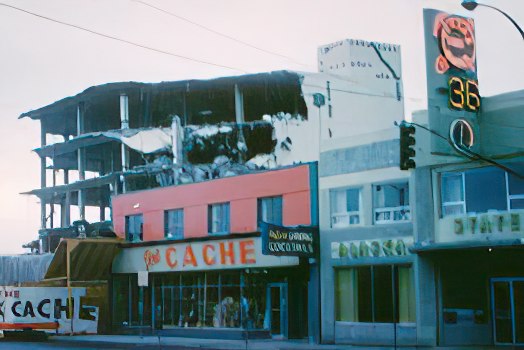 The damaged downtown Book Cache pictured above, was all that remained of a favorite downtown destination for Anchorage shoppers.

Quick to reopen, The Book Cache location pictured above became a meeting place for the people of Anchorage. And the question on everyone's lips was “where were you when the quake struck?” 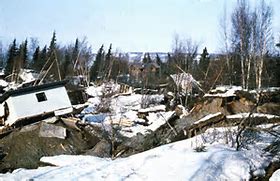 Take a look at these rare

(it was still under construction) 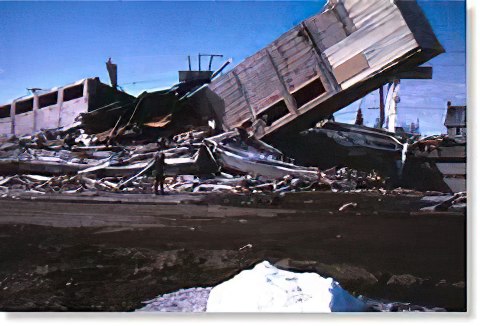 The Four Seasons building was still under construction when the massive quake struck. The only part that survived was the elevator shaft pictured above.

What was left of 4th Avenue 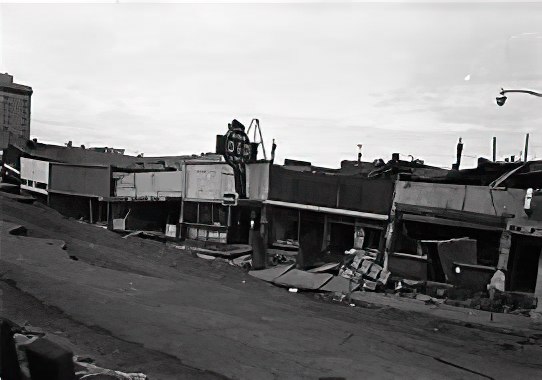 The eerie picture above looks more like a ghost town than 4th Avenue in Anchorage.

This picture is a striking reminder of the incredible destruction our town endured.

Can you even imagine how the people who were in those businesses, on the sidewalk, or even driving by, must have felt when those first powerful jolts began shaking everything apart?

To this day, many of those who survived, still deal with Post Traumatic Stress Disorder as a result of their experience on that day and the difficult days that followed 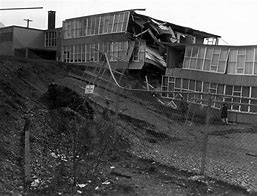 In the days and weeks that followed, Anchorage school officials had to come up with new places to continue schooling for many of the town's children, including elementary, junior high and high school students.

It was yet another reminder that our lives were now changed forever by an astonishing force of nature. 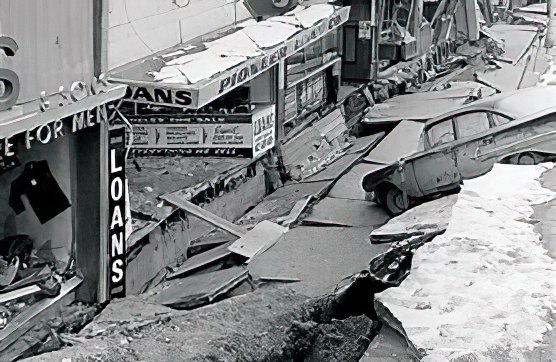 For those of us who lived in Anchorage when the quake struck, the picture above shows a familiar sidewalk where many of us had stood to watch the Fur Rendezvous, our winter carnival, the month before the quake.

And then in just five minutes it was all gone.

For a time after the quake, we wondered if our town would ever be the same. 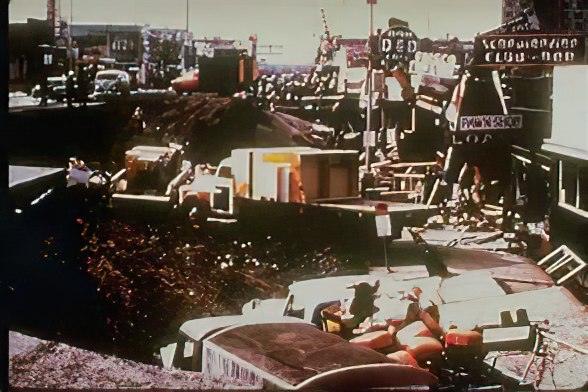 This section of 4th Avenue had sunk below street level, destroying many businesses during the quake.

But those who lived in Anchorage were determined to rebuild.

Looking at the picture above, it's hard to believe that they were able to clean up all the devastation, let alone rebuild.

For all of us who survived the quake, when reconstruction began, it gave us a glimmer of hope for a brighter future.

The above newsreel footage, narrated by Ed Herlihy, vividly shows the destruction that occurred during the 9.2 magnitude earthquake.

As explained in the film, this earthquake was 35 times as strong as the San Francisco earthquake in 1906. Can you even imagine that?

Conservatively estimates for the damage were around $500 million dollars. And of course, that was in 1964 dollars.

There was so much destruction that there were not enough Federal Disaster funds available to cover the cost.

Following the quake, much needed supplies were flown in to Anchorage's Elmendorf Air Force Base and a complete hospital was airlifted from Seattle.


While Anchorage has its share of quakes, the one on Good Friday, 1964 was much more intense and destructive than any other – before or since.

And those who experienced the terror and devastation first hand, still vividly recall their experiences – and always will.


What You Just Learned


The 1964 Good Friday earthquake was a magnitude 9.2, or 35 times more powerful than the 1902 earthquake in San Francisco.

From reading the first-hand accounts, written by survivors of the earthquake, you learned what they saw, heard and felt as the shaking continued.

As you learn about this horrific event, it's easy to see how Alaskan's responded. They quickly stood up proudly, helped each other and together, they rebuilt Anchorage, the town they love.