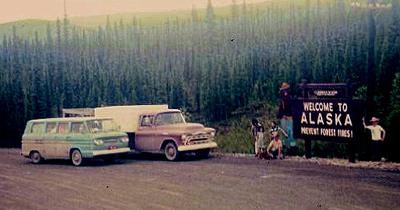 They finally made it

No Ordinary Canary tells the story of a family that traveled the ALCAN Highway with a dog and a bird.

“Loved your story. Driving the Alcan “back in the day” was a remarkable adventure and not for the faint of heart.

Your story captures that adventure beautifully. And your Canary was some bird.” Anonymous

At age 11, I traveled the ALCAN Highway from Wyoming to Anchorage with my father, my mother, my sister and two brothers — not to mention a dog, a captured ground squirrel, and a canary — to start a new life in Anchorage.

In 1967, the Anchorage Chamber of Commerce recommended the following for the ALCAN Highway trip. Taking no less than one hundred dollars per person in cash. And it advised using vehicles no older than three years. My dad purchased a ten-year-old 1957 pickup two days before our departure, and my mom drove our six-year-old 1961 Corvair Greenbrier van. Close enough, they figured.

We inched our way to my aunt’s home in Glendo, Wyoming. We had traveled just one hundred miles that first afternoon. We stayed the night, leaving the canary in the van. Fortunately, he survived.

We shopped for tires in Glendo, then hit the road, arriving in Billings, Montana at 10 PM. On Day 3, Canada loomed on the horizon as evening fell — and the Greenbrier began ominous howlings. The closer we got to Canada, the louder the noise.

At ten o'clock, that rainy night we sought shelter in a Shelby, Montana filling station, 35 miles south of the border, while a mechanic poked his head into the van’s engine compartment. “I know that sound. Main bearing.” Mom freaked. Main bearing? New engine? She looked weary. Dad wasn’t so worried.

The repair was minor.

We stopped at the Canadian border just long enough to exchange currency. We were all surprised that each denomination of Canadian money was a different color, like a wad of Monopoly money.

Farther north and west we lumbered through Alberta and British Columbia. As we did so, the sun stayed up longer and longer. Eighteen hours of slow, hard driving would end with camp to set up.

Exhausted we crawled into sleeping bags in broad daylight at eleven o’clock. I blinked at the bright tent roof. At two o'clock, every morning, Mom would pop up, bright-eyed, rousting everyone. She had no idea how that pace would take its toll on her disposition over several days.

To this point, we had set our eyes on Dawson Creek in British Columbia, the start of 1,231 miles of gravel roadway known as the ALCAN Highway. Dawson Creek was the “last chance” before entering official “wilderness”.

My mother, weary from the comments of other travelers, neared the landmark with trepidation. “A mean trip,” some would say, looking at the ground and shaking their heads. “Talked to a fella yesterday… ruined eight tires… vehicle broke down in the middle of nowhere… got run off a cliff in a cloud of dust…” Mom dropped her hands and crossed her fingers.

Dawson Creek is not just a place you pass through. It’s ceremonial. While both vehicles were being serviced, we lunched, resupplied and took pictures at “Milepost 0”, the sign marking the official start of the ALCAN Highway.

At seven o’clock, Friday night, June 16, our tires hit gravel with a shudder that would last for more than a thousand miles.

Cars coming from the opposite direction told the story: layers of mud caked over every inch with drivers peering through scraped out “holes”. Windows and headlights cracked and broken. Spare tires lashed to the tops, sides, and rears of vehicles. Mom swore the people looked happy at the thought of nearing pavement again. And she swore they peered back at us with eyes of pure sympathy.

We crunched along at thirty-five miles per hour. Cars zipped around us in clouds of dust and sprays of gravel. Many of those cars would be seen later, fixing flats or stranded with blown parts. The insides of our vehicles were filled with dust. Mom choked and began to miss the rain. The canary turned gray. When the road got too rough for him to cling to his perch, he squatted in his feed cup. But he never stopped singing.

After entering the Yukon we set our eyes on Whitehorse, the only “real” town before Alaska — and only 300 miles from the Alaska border! Reaching Whitehorse meant we could expect to see Alaska (and pavement again) by that evening. And we could expect to pull into Anchorage by the following afternoon.

Before Whitehorse, however, rain returned. At first, the respite from the dust was heavenly. But soon passing speeders and large trucks threw up gobs of mud instead of dust, obscuring windshields and producing a slippery ALCAN highway. No doubt about it: dry was better than wet.

By Sunday, June 18, we had been on the road exactly one week, sucking dust for two days. And Mom began to long for a shower and a mattress. But cabins were exorbitant at twenty bucks a pop! And cash was becoming dear. The farther north we drove, the higher the prices. My mother remembered: “A simple hamburger – no pickle, no chips, nothing but a burger – was eighty cents! Milk was a quarter a glass! Even a cheap breakfast of toast, juice, and coffee was eighty-five cents per person! Outrageous! And the prices became increasingly exorbitant as we progressed.”

Dad checked for cabins at each stop. No luck. Fellow travelers always arrived first with the same idea. Depressed, Mom waited in the van and watched as Dad went inside yet another roadside service center to inquire about a cabin. Wait! A key? Yes! A cabin! And the best part was the price: just sixteen dollars.

Day 9. Monday, June 19, well rested and high in morale, we hit the road again. We rolled into Whitehorse about midday. Plans called for servicing vehicles, refueling, a brief lunch and pressing on. But plans were thwarted. Stopped at Whitehorse’s only traffic light, the Greenbrier sensed civilization and pitched a fit. So, for the second time in two days, we settled into comfortable accommodations while, for the second time in six days, we waited for a mechanic to fix the van.

Dad went to retrieve the van at 9:30pm. The mechanic sputtered all over himself, describing to my dad the royal serenade to which he had been treated. High on the garage hoist, the canary sang into the night while the mechanic fiddled. “No fooling, I tell ya, this ain’t no ordinary canary.” How could he be? We chilled him overnight in Wyoming, covered him with dust along the highway and shook his gizzard loose all the way. His delicate lungs should have collapsed. Instead, he sang all the way to Anchorage.

My folks set the alarm for three AM, certain to arrive in Anchorage by that next night. But for Mom, the short nights began to take their toll. In her mind, the border, pavement, and Anchorage were all neatly bundled together in one tidy package at the end of a long gravel rainbow – the reality of another 370 miles be damned.

We reached the Alaska border at four o’clock in the afternoon, June 20, 1967. We whooped and hollered and tossed cowboy hats into the air. We danced in front of the huge sign that welcomed us to our new home state. All except Mom. After thirteen hours behind the wheel that day, she sat in the van and cried. Anchorage wasn’t there. She had it pictured… “right there – beside that sign, right next to that edge of pavement.”

The Greenbrier died in the driveway of a house my folks had rented by noon the next day. “Old Paint”, Dad’s 10-year-old Chevy pickup purchased two days before our departure, not only made the trip without a whimper but went on to serve both business and family for many more years.

My father said he came to Alaska with a hope and a promise: a promise that he had merchandise waiting at the dock with which to start a business, and a hope of making a success of that business. He did.

As for me, I went on to graduate from Anchorage’s Dimond High School in 1973, join the Marines and return to Anchorage in 1976. A journalist, I was assistant news director to Alaska TV news legend John Valentine at KIMO-TV-13. Later I moved to Fairbanks and became news director for the new KATN-TV-2. Later in life I married my high school crush, and I now enjoy my passion for airplanes, working at the Alaska Aviation Museum.

And as for Twitter, his songs made many a dark long Alaska winter much easier to bear.