March 1966 on the ALCAN Highway

Ride along in March 1966 on the ALCAN Highway and enjoy the adventure. 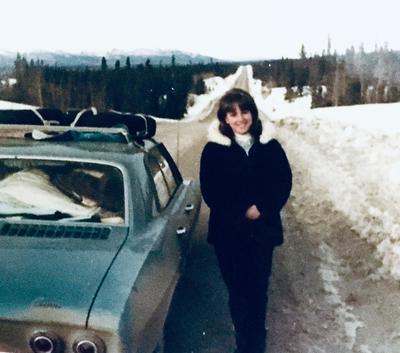 “Such a playful and witty writing style. I loved this story”


It was March 1966, when my husband and I left the big city to go somewhere that scared me to death.

Destination: Anchorage, Alaska via something called the ALCAN Highway.

At the customs station in Canada, we showed the officers our requirements for entering the highway; a loaded gun, $800 cash, a shovel, ax, flashlights, and flares. What? Didn't they care if we had food, water, and blankets?

“Watch out for the semi's”, one of them said. “They drive fast and will kick up gravel. If a rock hits your windshield, get the truck's license plate number. They'll pay for the repair.” “And stop for moose. If you hit one, your car will be totaled,” said another. “And don't forget,” he continued, “if you see a car that's stopped, you have to get out and see if the driver needs help.” I meant to ask him if that was why we needed the gun.

Driving along on a nice paved road, we watched out for moose–the semi vigil would begin on the gravel part–and kept our eyes on the odometer because the next gas station was 30 miles away.

It was 30.5 miles when we pulled up to a log building that had one gas pump and nine dogs harnessed to a sled. Inside the store, a large man with a black beard, in a wool plaid coat and beaver fur hat was talking with the owner. I stuttered, “Is, is that your dog sled out front?” “Yes,” he said. Wow! A Robert Service poem coming to life. Was this staged, I thought. No sooner after our car's tank was filled, I had to empty mine and asked where the restroom was. The owner pointed to a shed in back--my first encounter with an outhouse. As I sat in there, four enormous paws appeared under the door and began digging at the snow trying to get in. Oh, no! Wolves! I felt the panic that a trapped animal must have when it can't escape its predator. Then I heard the man call out to Yukon and Nanook. He said they were malamutes. I swear they were wolves.

The pavement suddenly ended and gave way to a narrow gravel road. How would there be enough room for a semi to pass by us, I thought to myself. Fortunately, there was, but barely.

We stopped at milepost 462 to spend the night. Here was another log structure with a huge pair of moose antlers secured above the door. A semi had to have killed it. Nothing could survive a collision with those trucks. I walked in and there it was–another Robert Service moment. Logs crackled in the stone fireplace as the heat from the flames radiated toward me. A bear skin rug lay between the fire and an overstuffed armchair where a gray haired man with a beard sat smoking a pipe. He greeted us with a smile warmer than the blazing fire. I wanted a bear hug.

Once in our room, I opened my suitcase and found my clothing covered with gray powder–a souvenir from the ALCAN Highway gravel road. Drifting off to sleep under a thick comforter, my eyes quickly opened upon hearing something skittering up and down the logs and across the roof. Was it an animal? Aliens? I was too tired to worry about anything.

In the morning, our host and his wife, a gentle elderly woman who reflected the same warmth as her husband, served us breakfast. The coffee was good and the biscuits with homemade jam, but the yolks of my eggs were so pale that they must have been laid by an anemic chicken. Oh, how I'd eat them again to have the chance to return to this rustic log structure owned by two of the friendliest people I'd ever ever met. It felt like I was home and hated to leave.

The clear blue sky and frigid air intensified my senses. We were in a vast wilderness so remote and quiet and where I heard silence for the first time. I was beginning to like this place.

Tok Junction was our next stop. It was dark when we arrived at the small hotel, its parking lot filled with pickups that had sleds on the roofs and dogs in the back of them. The dogs were housed inside structures made of wood with holes cut out of the sides for their heads to stick out. There had been races that day and the mushers were spending the night in Tok. We lucked out and got the last room.

The partying that was going on didn't bother me as much as having to sleep next to the public showers and toilets.

We awoke to the 10th day of our road trip. Anchorage was within our sights.

Soon we were on pavement again, but still rattling from three days on the rutted gravel road. Descending a mountain pass, and seeing more civilization, we thought, What could go wrong now? We didn't notice the patch of ice that made us do a 180-degree turn, coming close to the edge of a steep ravine. Okay. Don't assume we're infallible.

It was dark when we reached Anchorage and started to panic when we couldn't decide where to stay. There were so many hotels/motels to choose from! Our heightened emotions added to our weariness, so we just took the next one we saw, leaving the events on the ALCAN Highway far behind, but close to my heart.

Someone who knew I was moving to Alaska had said to me before I left home, “You'll either hate Alaska or love it. And if you love it and leave, she'll never let go of you.”