The Lucky Wishbone Story tells how George and Peggy Brown created of of Anchorage's favorite restaurants.

An interview with Patricia Brown-Heller, the daughter of George and Peggy Brown, who created and ran one of Anchorage's most loved restaurants.

Pat, tell us about your father and mother and how they met.

Harold George Brown, my father, was born in the village of Hager City, WI, attended country school, and graduated in 1939 from Red Wing High School in MN.

That same year he enlisted in the MN National Guard which was federalized the day before his 19th birthday, the World War looming.

In 1943, Dad finished flight school at Luke field, AZ and was commissioned a second lieutenant.  Also in 1943, Dad met the love of his life, Margaret "Peggy" Krause, in Denver, CO.

Peggy, from Pittsburgh, PA, was working in a restaurant and Dad was so smitten he asked her to marry him on their first date.  They married in Kansas City, KS, but George soon received orders to India to fly B-24s across the Himalayas, known then as the "Hump" and Mom, now pregnant with me, returned to her family in Pittsburgh.


The First Restaurant was 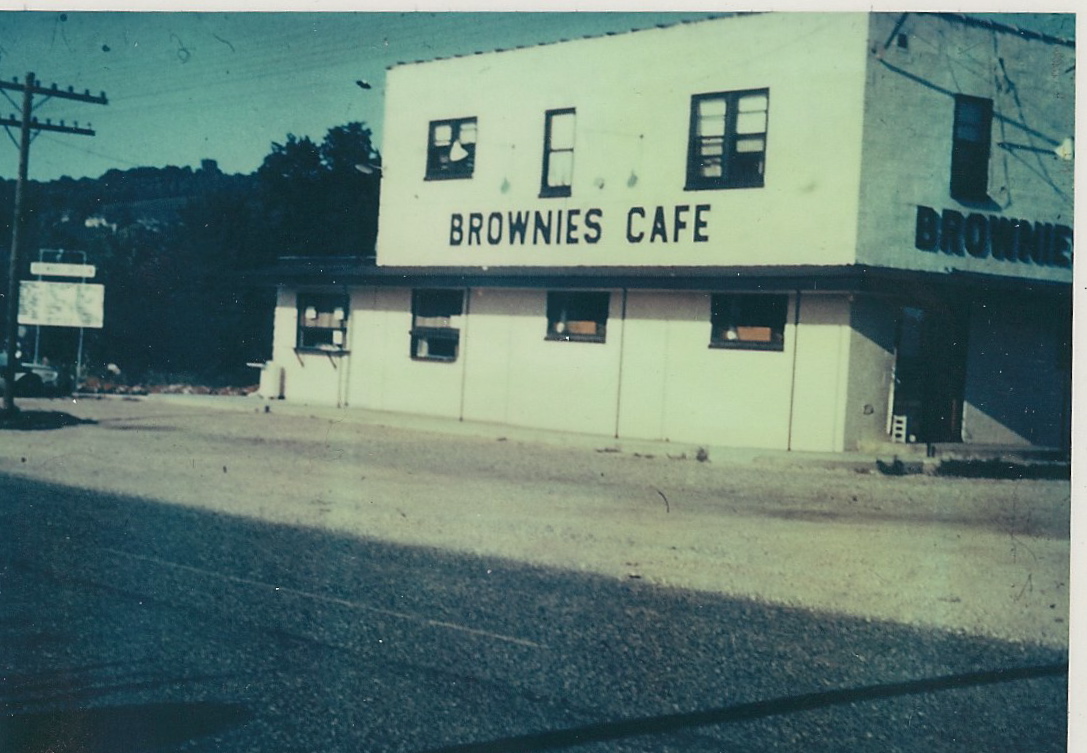 After the war, the couple moved to Dad's home-town in Wisconsin and he and Mom started a restaurant called "Brownies" with Dad's brother Jack and his wife Shirley.

My parents later sold their half and moved, temporarily, to Red Wing, MN before leaving the Midwest permanently in 1951 to drive the Alcan to the Last Frontier.

When your family drove to Anchorage over the Alcan in 1951, how old were you, and what was that drive like?

My parents, my brother Johnny and I, friends Cash and Doris and a black lab crowded into a 1949 Nash for two bumpy, dusty weeks on the road.

I was six and my brother was an active 18 months old toddler. I sat in the middle in the back seat for two weeks, my brother slept in the sloping back window or was (jumping) on Mom's lap. The black lab slept on the floor by Mom's feet.  We were all miserable!

George had a background in Construction. What was his first job in Anchorage?

Dad immediately got a job working construction on Elmendorf and built a house in the evening and weekends.  It was the Cold War era and the bases were being built up.  Dad did masonry work.

Your dad's brother Leon also came up with his family. Tell us about that.

But your family ended up leaving Anchorage and going back to the lower 48. What happened?

In the fall of 1954, Mom was getting antsy and tired of the long winters.

They sold the house, packed us up, and the family headed back to Hager City, final destination, Tucson.

Dad went ahead to Tucson and bought a closed-up restaurant.

He got back after Christmas and off we went again, this time the four of us plus Grandma, in our green '54 Ford, leaving the second week of January.  Mom was pregnant but wasn't due till March 1,  but she started into labor in Texas.

We arrived in Tucson on the evening of January 15th, dropped off Grandma with Johnny and me and Dad rushed Mom to the hospital.  We had a new sister a few hours later.

That time in Tucson was sad.

The economy was in a trough and business in the restaurant was slow to build.

However, in spite of the bad experience, we were delighted with the birth of Lorelei and loved the desert.

But there was another thing in Tucson that was soon to influence all our lives – a start-up restaurant whose take-out operation (though not their food) that Dad really liked; it was called the Lucky Wishbone.

Who came up with the fried chicken recipe?

The chicken recipe basically came from Grandma who cooked chicken every Sunday for family dinners. The hamburgers were similar to the style in the Wisconsin restaurant.

What did your family do when you return to Anchorage? 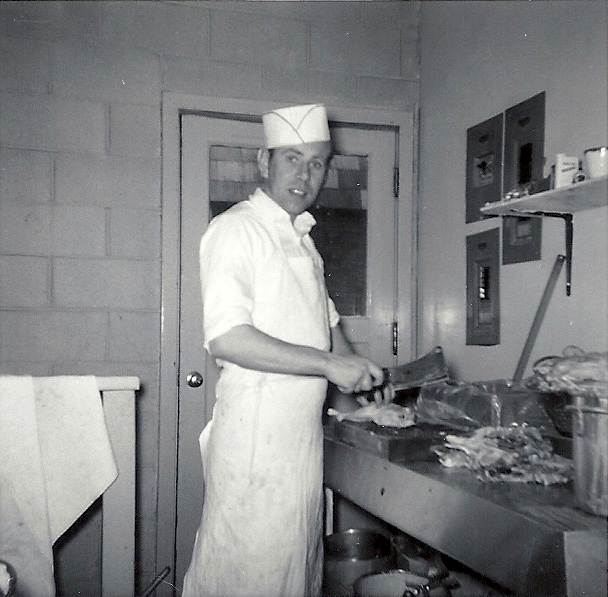 In the summer of 1955, mom and dad purchased three lots on East 5th Avenue from an old Norwegian carpenter, nick-named "Bicycle Pete" Pederson.

At that time the neighborhood was part residential and part 24-hour nightclubs.

There were three small houses on the new property.  One house was moved to the back lot, and soon construction began on top of its basement. Dad, then a labor foreman and a partner, Sven Jonasson, built the new restaurant almost entirely themselves, evenings and weekends, while Mom worked at the A&W.

So, George and his partner Sven Jonasson actually built the restaurant themselves. What was that like?

Everybody was exhausted and grumpy!

We rarely saw Dad because he worked all day at the construction job and nights and weekends on the restaurant.

Mom was working at the A&W for my aunt and uncle, and we were living in a very tiny house with only one bathroom. 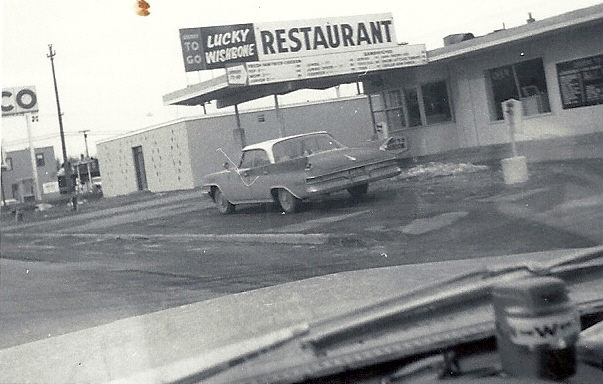 The Lucky Wishbone first opened for business on November 30, 1955. What was their first day like?

We brought in a whopping $80 the first day!

Sven quickly decided he wasn't fond of the business and sold his share.

Dad's mom, Dagny, helped out with babysitting and cooking the first few years. After the last child, Corky, was born, the family moved from the tiny house next to the restaurant to a new split-level in College Village.

Dad again did most of the construction. The house and the restaurant all survived the 1964 Earthquake.

In 1990, George's mother passed away from cancer. After that, George wanted to honor her by making the Lucky Wishbone Alaska's first smoke-free restaurant. That was not an easy decision. Tell us about that.

The restaurant is small, and it was hard to divide it into smoking and non-smoking.

The decision was both revolutionary and controversial, and according to my mom, almost caused a divorce, fearing they would lose too many of their long-time customers and employees.  Fortunately, no employees quit, and business actually improved.

Pat, did you work in the restaurant? Did your entire family work there?

Four generations and soon to be five - from my grandma to me and my siblings and all the grandchildren, we all worked there as did most of our friends and neighborhood kids.

I was the babysitter till about 8th grade when they added my responsibility to peel potatoes every morning before school – 150-200 pounds a day, peeled and cut into French fries.  I was really fast since I hated to miss a minute of sleep.

I did the bookkeeping and banking as well as pantry (prep work), waitressing and fry cook.  I loved doing waitress work and being with the public and was able to own a car and pay all my college tuition from my earnings.

Mom loved the restaurant but encouraged us to get an education and a different career since the business is so hard on the home life.

Looking at the menu, what was (is) your favorite?

I like everything on the menu, but my favorite has always been the Jumbo Hamburger.  I don't get them very often, but sometimes I change and order the blueberry milkshake, giblets or, of course the fried chicken. 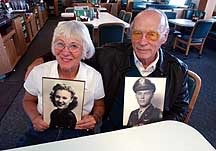 The Lucky Wishbone has received many awards, but your mom and dad received one that came in the form of a complement from Senator Ted Stevens to a very important person. Who was that?

The restaurant has received many accolades over the years, and in 2002 was named Alaska's Small Business of the Year by the SBA.

Mom flew to Washington, DC to receive the award and was introduced to President Bush by Senator Stevens who told the President, "This lady makes some of the best fried chicken in the country". 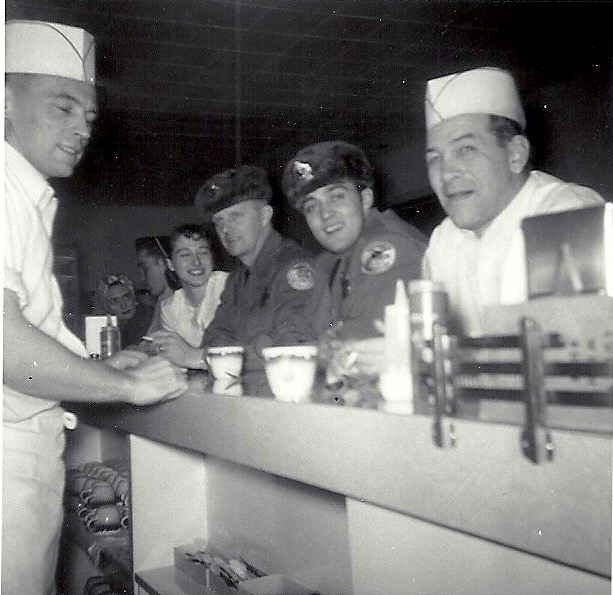 Over the years, The Lucky Wishbone has become so dear to not only Anchorage, but to Alaskans all over the state. How did George and Peggy feel about that? They not only created a restaurant, they created a much loved gathering place.

Mom loved to please people and thought of every employee and customer as a personal friend.

Her ability to remember names was second only to Governor Egan.

Dad was playful, adored children, was outspoken and sometimes outrageous, and people loved him for that.

They watched generations of Alaskans grow up and come in with their own children and grandchildren.  As my parents got older, they didn't go to work because they had to, they went because they loved to, and it was where they really wanted to be. 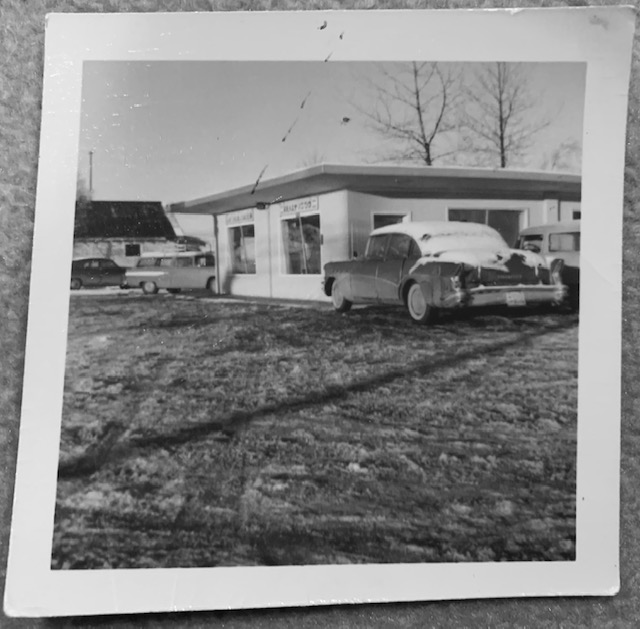 The house to the left was the Brown's house. It was moved after the 1964 earthquake.

Rosetta's Bar was located in the McKinley building, which was severely damaged in the 1964 quake.

So Rosetta's Bar (now "Van's") was moved to the former location of the Brown's house.

Pat, is there anything you would like to say? 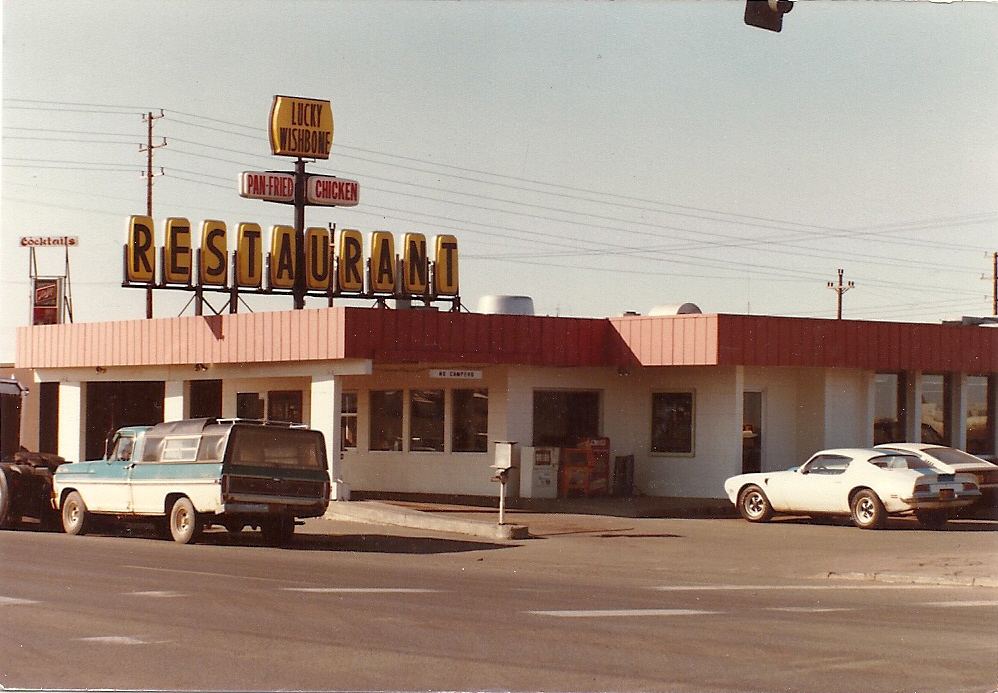 By their own example of honesty, hard work, and a consistent product, my parents trained and helped educate hundreds of young people and provided tasty comfort food to their customers.

I'm so grateful to have had them nearby for so many years, grateful for their love, and grateful for instilling honesty and a work ethic to me and my children.

What would you like to say to all those Lucky Wishbone customers that have loved your mom and dad's restaurant all these years?

Mom and Dad loved each and every one of you, and we hope to continue their legacy.

Thank you very much Pat for giving our Anchorage Memories visitors the opportunity to get to know your parents, your family and the Lucky Wishbone a little better.

I don't know about you, but after this, I could go for some Lucky Wishbone fried chicken, or one of those wonderful cheeseburgers.