Breakdown on the Alcan Highway

Breakdown on the Alcan Highway, tells the story of what it was like to travel the road in 1972. 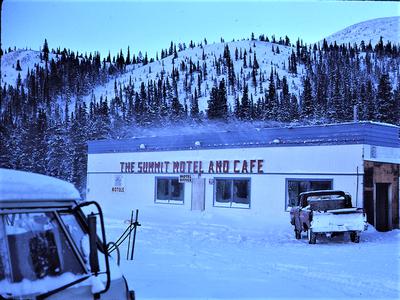 
It was December 1972 when I was 22 and traveling out of Alaska on the ALCAN Highway in a Volkswagen bus.

I was being discharged from the US Army and had orders to report to Ft. Lewis, Washington in 8 days, on December 11.

I had received approval to drive my vehicle to the discharge station in Washington state.

Since it was the middle of winter, icy, windy and snowy conditions existed during the route.

Typically, there was no shoulder on the road and snow would be built up 3 to 4 feet in some places along the highway, especially in the Yukon and northern British Columbia provinces.

I left Fairbanks on Monday, December 4th at 6 am and traveled the Richardson Highway south-east towards the Canadian border.

1 got as far as 35 miles from Haines Junction (200 miles from the Alaskan border) when the bus quit working for no apparent reason. I spent the cold night near Kluane Lake, off the side of the road.

The next day I tried to get the engine to start, but was not successful.

A truck driver stopped and towed me to a gas station in Haines Junction.

The mechanic got the bus running and I drove 100 miles to Whitehorse, Yukon, where I had another gas station mechanic work on the bus.

The next day, Thursday, with the bus working again, I traveled along Route 97 – now in British Columbia – 400 miles to Liard Hot Springs where I planned to spend the night after 7 1/2 hours of driving.

It was then that I heard an unusual noise coming from the generator. This was very disturbing news.

On Friday morning, without any road services in the area, I cautiously began to drive the bus from the Hot Springs and got as far as milepost 462 at the town of Toad River along the ALCAN Highway.

At the gas station there, a mechanic gave me the grim news: the generator had blown and the fan belt which cooled the engine burned off. He knew a mechanic at Summit Lake, 35 miles south of Toad River, who had a Volkswagen generator and arranged for it to be delivered the following day.

On Saturday, the generator was installed but an oil leak subsequently developed. Nothing further could be done at Toad River, so I got a tow to Summit Lake (elevation 4,250 ft. and the highest point on the highway.) where the engine could be pulled out for examination.

On Sunday, the owner/mechanic at the Summit Motel, Café, and Esso gas station – Albert Genier – reported that there was a crack in the engine block and there was nothing else to do except replace the engine (a 40 horsepower, 1200 series). Terrible news; I was stranded.

So, by Monday, Dec. 11th – one week after leaving Fairbanks – I waited at the Summit Motel for a ride to Fort Nelson, the next town south where there was a jet airport. A driver was available later in the day and I rode out with him.

The next day, Tuesday, I flew from the jet airport at Ft. Nelson to Seattle and made it to my Ft Lewis discharge appointment; 2 days late (I notified the Army discharge office that I was going to be reporting late).

In summary, I had to abandon my VW bus behind the gas station at milepost 400 of the highway at the Summit Motel and Café, British Columbia.

It was still there the following summer when I drove back with another van to retrieve the engine and other belongings.

I wonder today if the engine-less VW bus is still there, at milepost 400, Summit Lake, on the ALCAN Highway, 48 years later.


Breakdown on the ALCAN Highway

We had purchased an older Winnebago 17' RV and were pulling an overloaded trailer. There were five of us traveling in the RV and a daughter's Dodge Neon.

We were having a pleasant trip, taking our time and nursing the RV along the ALCAN Highway. After four days we were nearing Fort St. John when the RV began losing power.

We stopped for the night, had a nice dinner, then went to sleep while crossing our fingers that old Winnie would feel better in the morning.

Somehow we limped into Dawson Creek the next day and were able to find a Ford place that had a mechanic who could look at it 'tomorrow'.

Two days later I learned Winnie needed a new camshaft and the part could be ordered for delivery 'day after tomorrow'. Not much we could say other than 'okay' and go back to the motel.

We spent the time watching TV, playing games and being bored. One afternoon I took the kids to go see the movie "Antz".

Finally, the part came and though this was mid-morning I was told they wouldn't get to the repair until “tomorrow”.

That was when my wife displayed her powers of persuasion and the mechanic decided he would rather not see her “tomorrow”.

Sure enough, at 6:00 the mechanic phoned us to come pick up our Winnie, and we drove far into the night.

Winnie was better and eventually got us to Portland. Barely.

It took us 10 days to traverse the ALCAN Highway that trip.