A Penneys Worth of Mush

A Penneys Worth of Mush tells the story of George Attla and the 1969 Anchorage Fur Rendezvous sled dog race.

This was my fourth winter in Alaska, (if I included the last few days of the season driving the ALCAN in 1966) and a proud “Sourdough,” because of it.

However, there was still some of the “Cheechako” in me, the term referring to someone who hadn't even spent one winter here. In the lower forty-eight, mush simply alluded to overcooked oatmeal. But up here the word had a more substantial interpretation, connoting those who drive dogsleds: the “Mushers.”

I first encountered them four years ago in the parking lot of the Tok Hotel.

Some invisible force pulled on me, as I stood in the frigid air, staring in awe at their trucks with sleds secured on the roofs and dogs' heads pushing out of the holes of their compartments. Now this is what it's all about, I said to myself. Then I felt another pull: that of my husband's hand tugging on my coat to take me into the Hotel where it was warm. Still, I could hardly wait to see them in action, but that opportunity wouldn't come until next year at the “Anchorage Fur Rendezvous World Champion Dog Sled Races” where for three days, Mushers raced on a twenty-five-mile course through and around the city.

I had a job at the Anchorage J C Penney store with Sunday being my only day off to watch the race. That was enough for me to know that I was hooked on this sport and wanted more. And I got it.

At the 1969 Fur Rendezvous I had weekends off and could spend two days with the Mushers!

For the total experience, I'd position myself at three places along the racecourse: the starting line, where the dogs barked and strained on their harnesses, eager to run; outside of town to hear the sled's runners glide across the snow; and, finally, at the finish line where the dogs looked tired but satisfied. And when it came to the Mushers themselves, there was one whose name everyone knew and who the Penney's store sponsored: George Attla, aka the “Huslia Hustler.” (Huslia is the village where George Attla was born.) He had won that year, and was expected to win again. 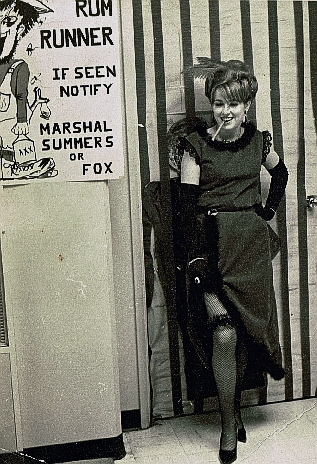 Here was a chance for me to live a dream. Well, sort of.

As a young girl, I wanted to be a can-can dancer and dressing up as a dance hall girl came close to it. After I put on my makeup, had my hair done and donned the attire, I easily stepped into the role, as if I were an actor in a western, dismissing my demure nature to become a bold flirt… and with results! A guy would take my picture, he would show it to his friends who would in turn come to the store, looking for me to take my picture. And oh did I have fun. One day, an associate of mine overheard one of the store managers say to me, “Nice legs,” as he walked by. From that day on I was known as “Legs Leino,” instead of Marci Leino.

But for me, the real fun was going to be able to watch the last two days of the Fur Rendezvous races and to support George Attla, the favored Musher to win.

I lived on Christensen Drive, and had only a few blocks to walk to 4th avenue and the start of the races. I'd get there early and watch trucks haul in snow, so the dogs would have better traction. Who back home would believe this?

As the Mushers arrived, I'd scope out the blue truck with the Penney's name on it in big letters. Then, like salmon swimming upstream to spawn, the crowd jostled for a better position on the sidewalk to catch a glimpse of the “Best Musher in the World”.

One by one the dogs were brought out and harnessed, eager to prove again that they were the best. And we were just as eager as them for the race to begin, but without panting or hanging our tongues out. I'm sure though, that if we had had tails, all would be wagging.

Then it was time! Team number one, George Attla/JCPenney, was off. And so were most of the observers to kill time in a warm place. But I was cemented to the sidewalk, in order to be near a Musher's vehicle or sled. What does it take to become a Musher? Do I have to live in Alaska? What do I need to get started? Where do I go to learn? Would my husband divorce me? I kept asking myself. Or was it another dream like the one to become a can-can dancer? Wait! That one did come true! I took a picture of Attla's truck before joining the spectators, now gathering at the finish line.

Soon we could hear people shouting in the distance, and everyone knew it was a Musher. No, two Mushers were battling for position. George Attla crossed the finish line 0.03 seconds ahead of Roland Lombard. What had happened since yesterday when the gap between them was 2:20 minutes? Was Attla slower today or Lombard faster? This was a little too close for comfort.

On Sunday, I decided to leave earlier and found that a crowd had already gathered near the starting line. Again, I watched the routine of readying the dogs, followed by the start. Then came the waiting. Attla was going to win. We were all sure of it. He would have to trail Lombard by 2.24 minutes in order to lose. How likely was that to happen? However, unlike yesterday, the crowd didn't disperse for a warmer place to wait. They remained outside with me.

The shouts up the street that signaled a sled was approaching the finish line weren't as loud as yesterday's. Closer and closer a Musher came, and our hearts stopped. Where was Attla? We clapped for Lombard, but all eyes stared up the street for the next Musher to appear. There was still time for Attla to win.

One minute went by. Then two. Finally, there was Attla, and we cheered louder than ever, as he crossed the finish line 2.48 minutes behind Lombard. The final tally for the three-day event was Lombard at 5:01:50 and Attla at 5:01:59. Nine seconds! So close. So exciting. So disappointing.

Some devoted fans and I stayed near George Attla's truck while he stowed his dogs and secured his sleds. There were short conversations and small talk. I just watched. And by observing this man, the “Huslia Hustler” I left knowing who he really was and what he was really like. Because at the end of the day's race, the one in which he lost, he knelt down to every one of his dogs and thanked them for a job well done. The bond between man and man's best friend was deeper than I had ever seen. Now to me, that says everything about his character: the Musher who raced for Penney's.

George Attla went on to win Anchorage Fur Rendezvous Sprint races; ten in all; eight American North Championships; the first annual International Sled Dog Racing competition and in 1972 won seven of eight other competitions and is recalled as the Best Musher of the Twentieth Century.

"Spirit of the Wind"

Check out this clip of the movie


When author Marci Peterson first arrived in Anchorage as a Cheechako, she was introduced to her very first taste of Mexican food at the La Cabana restaurant.

Check out her story, A Cheechako and a Taco at the La Cabana