Face To Face
with John Lennon

A true story of how one lucky Anchorage girl named Mary came Face to Face with John Lennon, her favorite Beatle. Yes, Beatlemania came to Anchorage.

“It's nice getting the perspective of someone who actually did… come face to face with John Lennon or any of them.” 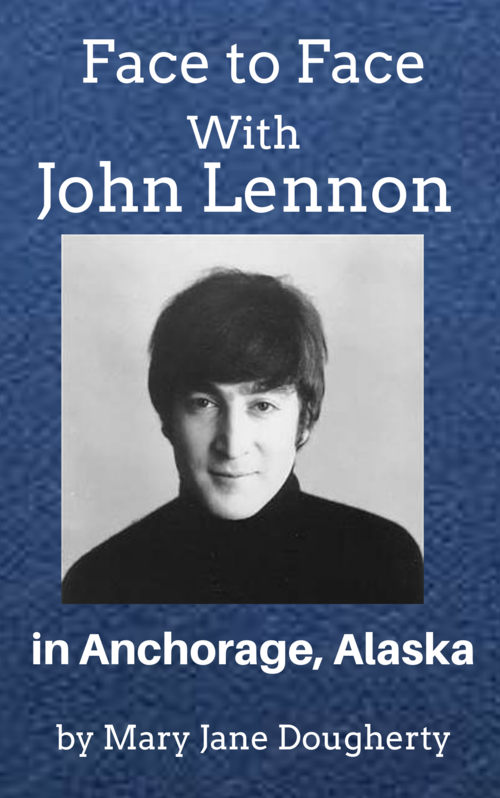 “A wonderful, fun experience that I will never forget”

Remember when the Beatles came to Anchorage?

In the summer of 1966 the Anchorage Westward hotel became the scene of something you'd only seen before on the news, or in one of the Beatles movies.

An excited crowd of Anchorage teens, hoping to catch a glimpse of the Beatles, gathered around the downtown hotel after word got out that the Fab Four had landed at Anchorage International Airport and were staying at the Westward Hotel on their way to Japan.

And one lucky, fast thinking Anchorage teenager named Mary was about to have a once-in-a-lifetime experience that she would never forget.

Anchorage’s top officials drove that car around town and in parades. Then the hotel manager came back out and made another announcement. The Beatles would be coming out the front doors and down the walk way to the limousine. The Beatles would then be driven to the airport where they would board a plane on their way to Japan. So, everyone was to remain calm and stay behind the velvet ropes.

Strangely enough, the crowd of mostly teenage girls remained calm and started talking among themselves.

Now, allow me to explain that during this part of the summer in Anchorage, Alaska, we were enjoying Summer Solstice, so it wasn't getting very dark. Nighttime was as bright as day. And I suppose that's the reason, all of us felt so safe at that late hour.

How exciting! The Beatles would be coming right out those front doors. The very doors that Norman and Betty and I were standing next to.”


If you were living in and around Anchorage in the summer of 1966, you were probably very surprised when you heard that the Beatles were in Anchorage, staying at the Anchorage Westward Hotel.

Your initial reaction was most likely, “no way, you're kidding me right?”

Well, one teenage girl in Anchorage had that same response when her sister woke her up with the news.

Mary, one of the creators of this website Anchorage Memories, didn't believe her sister when she first told her about the Beatles being in Anchorage.

But later that night, Mary would have a once-in-a-lifetime experience she would never forget when she came Face to Face with John Lennon in downtown Anchorage.

Yes, I want to


Through Mary's fun book, you'll experience all the excitement as Mary and a crowd of Anchorage teens gather around the Anchorage Westward Hotel just hoping to get a short glimpse of the Beatles – even if they weren't very close to them.

As the afternoon turned into evening, Anchorage teens continued to hang out around the hotel.

And each one of them just wanted one thing – to see the Beatles, or even one Beatle while they were in Anchorage.

But at the very last minute, just before the Beatles left the Anchorage Westward Hotel, Mary had an idea – an idea that would bring her Face to Face with her favorite Beatle.


You'll discover how Mary came Face to Face when you download her fun book that lets you relive Beatlemania in Anchorage, Alaska.

A true account of the legendary band and how, a 14-year-old Anchorage girl named Mary, had “An amazing, fun experience that I will never forget” Mary Jane Dougherty, author.


It was 1956 when a 17-year-old English lad named John Lennon formed a band with some of his school friends. They called their band the “Blackjackets”, then changed it to the “Quarrymen”.

In 1960, the group had morphed into the “Beatals”, then the “Silver Beetles” and finally the “Beatles”.

Then in 1963, the Beatles' song “I Want to Hold Your Hand” was being played on the radio in America and what was called the “British Invasion” followed. The Beatles were a big hit.

But Teenagers in Anchorage had no reason to hope that the Beatles would ever come to their town.


The Beatles were on their way to Japan.

Their plane landed in Anchorage to refuel. During the stop-over, the ground crew discovered a problem with the plane's hydraulics system.

And as things began to unfold, someone alerted the local Anchorage, Alaska radio stations that the Beatles were in town.

Meanwhile, it was decided that the Beatles would be taken to the Anchorage Westward Hotel to wait for their plane to be repaired.

News that the Beatles were at the Westward, spread like wildfire.

Excited Anchorage teens began arriving at the hotel where they gathered outside, hoping they would get a look at the Fab Four.

Mary of Anchorage Memories was one of those teens and “Face to Face with John Lennon” is her story.