How much do you remember about places, events, and people in Anchorage? 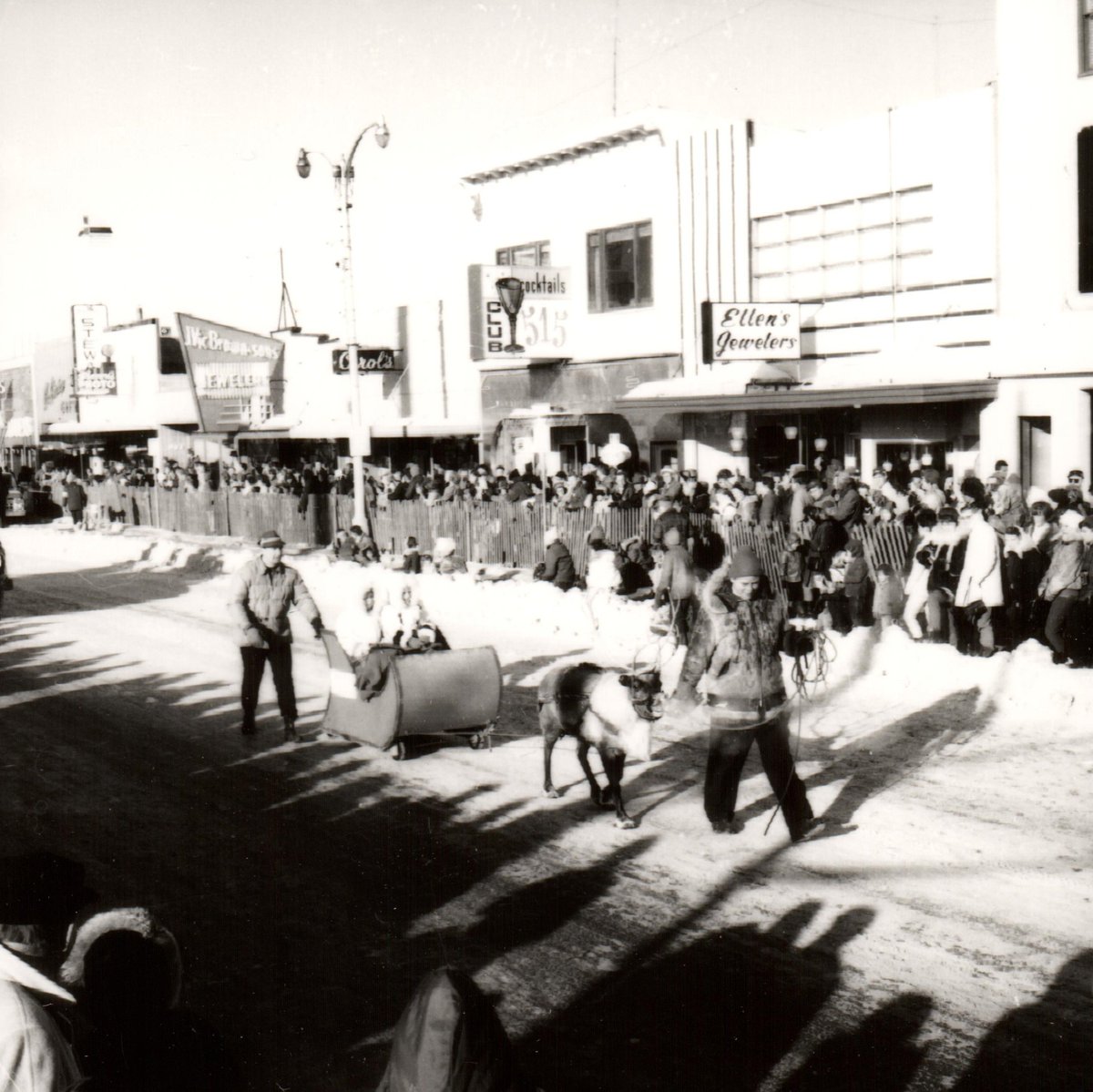 It all started around 1962, when Oro Stewart, of Stewart's Photo on 4th Avenue, decided she wanted a reindeer.

Then Oro and her husband Ivan got special permission to keep a reindeer in Anchorage.

Star was a female reindeer and got her name because of a white puff of fur in the shape of a star between her eyes.

The original star lived to be 23 years old. Since then, there have been 7 reindeer named Star. 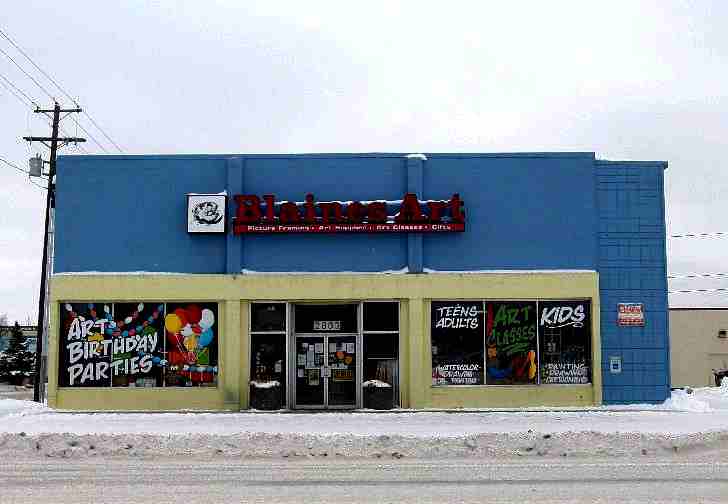 Anchorage DJ, Ron Moore, the Royal Coachman, used the top floor of Blaine's Paint Store (pictured above) as the location for his popular teen nightclub, “The Royal Pad”.

Then in in 1965, a high school student named Jim Harlan turned the location into a teen nightclub called the “Cinnamon Cinder”.

In 1966, when Harlan left for college, he turned the club over to Larry Snipes and Terry Shank. 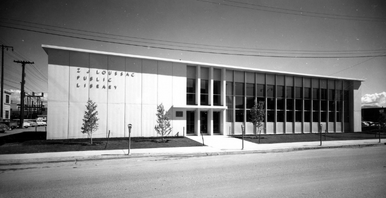 The original Z.J. Loussac Library was located on the northeast corner of 5th Avenue and F streets.

At that street corner, the library served the Anchorage community from 1954 to 1985.


To learn more, click on the short video below 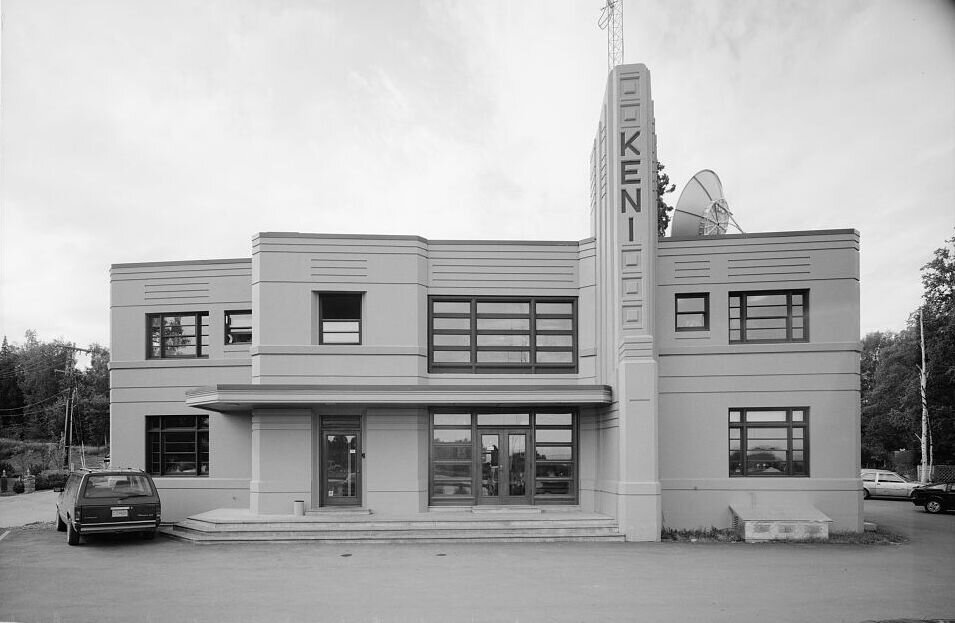 KENI radio (owned by “Cap” Lathrop) first signed on the air on May 2, 1948, as Anchorage's second radio station. KFQD was the first in Anchorage and Alaska.

KENI radio was originally located in the 4th Avenue Theatre building. It later moved to its own building (pictured above) at 1777 Forest Park Drive, overlooking Westchester Lagoon.


You'll enjoy this look (and listen) back with two Anchorage DJs in the 1970s. The KENI DJ is doing his show from the KENI studios pictured above. 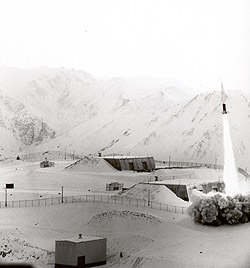 On the top of the Chugach mountains, the military built a Nike – Hercules missile defense location called Site Summit.

Do you remember that in 1960, school students all over Anchorage watched the first missile launch as they looked toward the mountain range?

As a student at Clark Jr. High School, Mike of Anchorage Memories recalls when all the students were taken outside to the front of the school where teachers told us where to look at the top of the mountain.

When the missile was launched, it was a remarkable site.

Missiles testing continued yearly in November and December from 1960 to 1963. After that, the population growth of Anchorage made further testing unsafe. 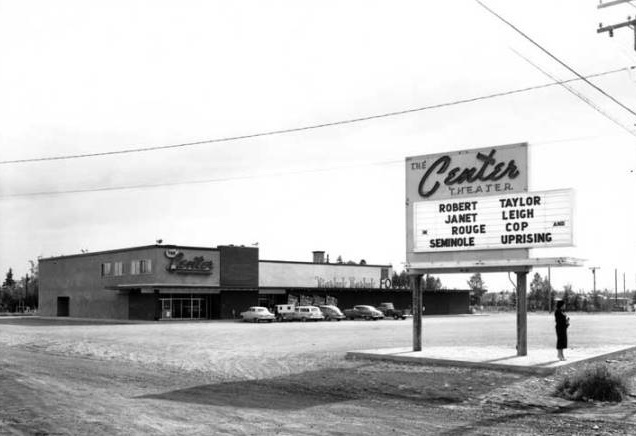 Do you remember this?

The Center Movie Theater, located in Spenard, was first opened in 1955.

Did you see movies there?


You'll love this memory-filled look back at Anchorage Movie Theaters including the Empress, 4th Avenue, Denali and more.

Anchorage's first high school classes began in the pioneer school house back in 1915.

During the Fur Rendezvous 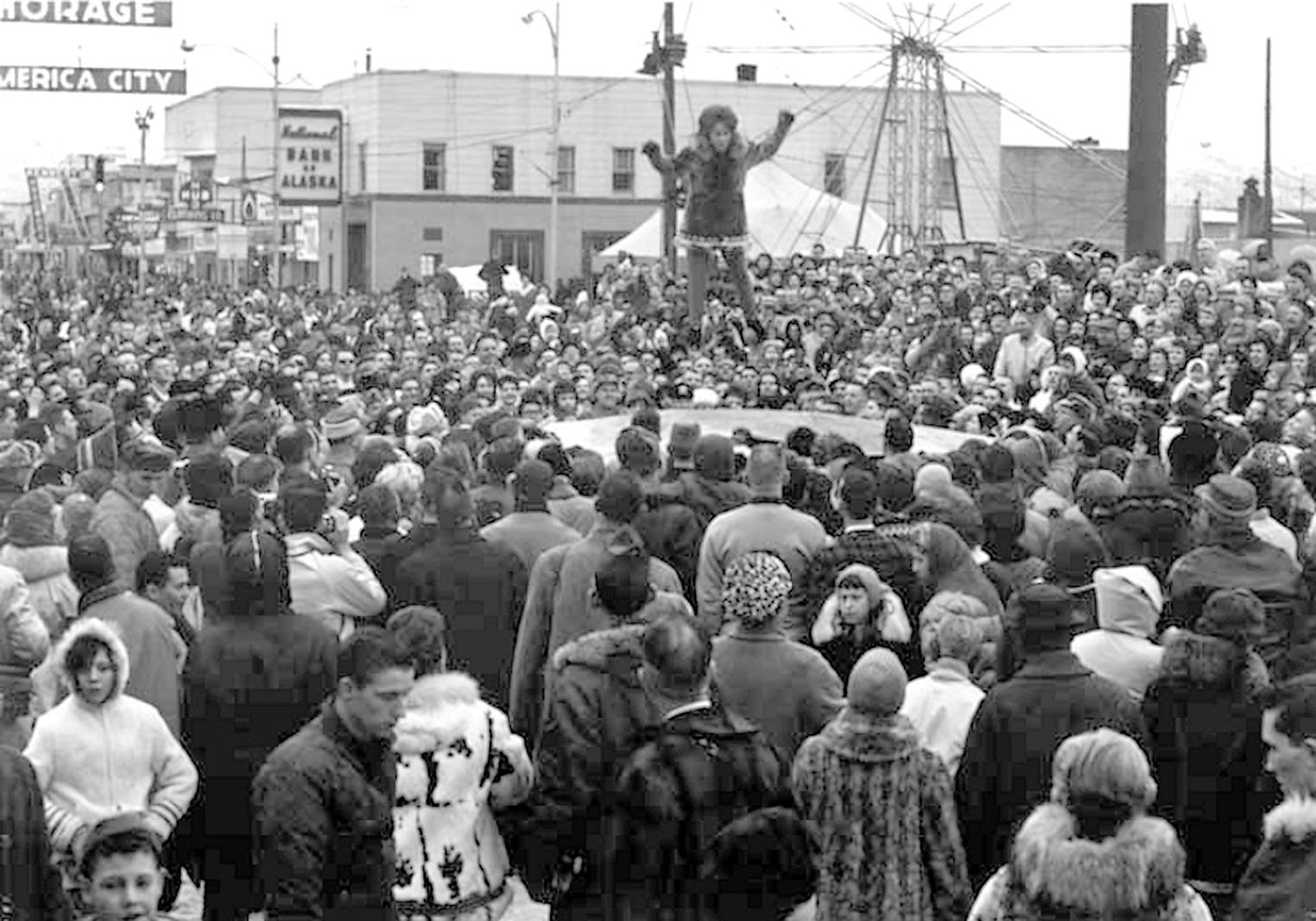 1950 was the first year for the Blanket Toss in the Fur Rendezvous winter carnival.

Alaskan natives from Nome and Diomede Islands were flown in that year to demonstrate the blanket toss to happy Rondy attendees. Are you in the crowd seen above?


Check out the 1965 Fur Rendezvous film below to see the Blanket Toss in action as well as footage of the parade and that year's Grand Marshall, Michael Landon, “Little Joe” on the Bonanza TV series. 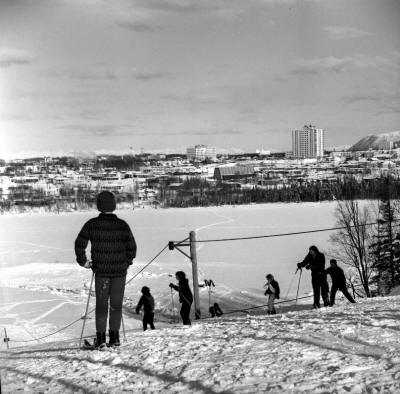 Do you remember that before Westchester Lagoon, there was a ski hill with a rope-tow where you could spend the day enjoying a great winter sport?

Behind the skiers was West High School.

On October 1, 1925, Romig came to Anchorage to be the Railroad surgeon at the Alaska Railroad Hospital on 2nd Avenue between A and B Streets, in Anchorage.

Romig Hill is where the Romig family lived in their cabin. 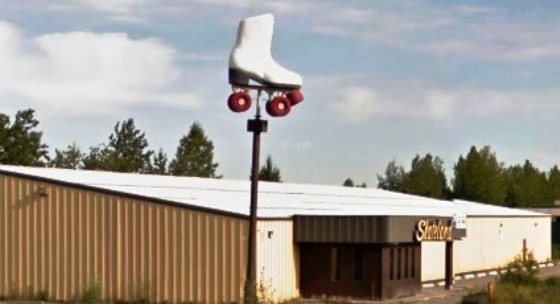 What are your memories of going roller skating in Anchorage?

What was your favorite link?

In the picture above, the giant roller skate was created by Anchorage artist, Josef Princiota. 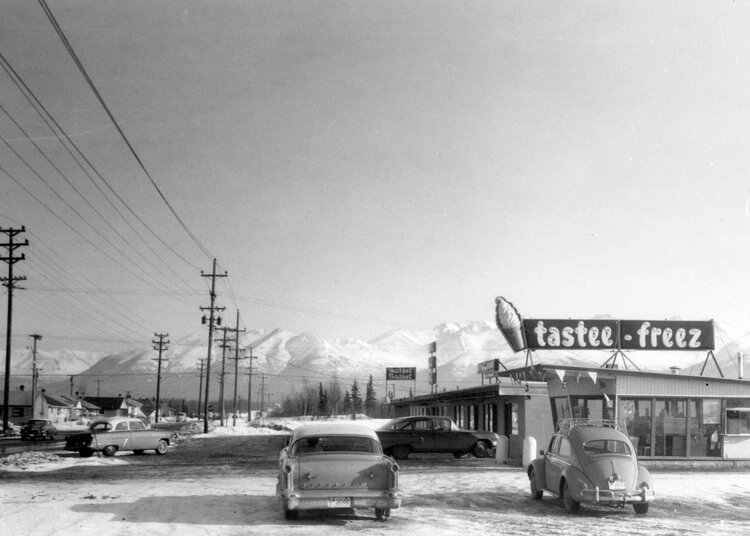 Lynn Cluff purchased the Tastee Freez in 1962. She also purchased two Ice Cream trucks and had them driven up to Anchorage over the very muddy Alcan Highway.

In those days, the Anchorage Tastee Freez was not open during the winter.

But in 1963, Lynn decided to keep her store open all year long.

And yes, folks from all over town happily visited her Tastee Freez to get a frozen treat, even when it was 20 below. 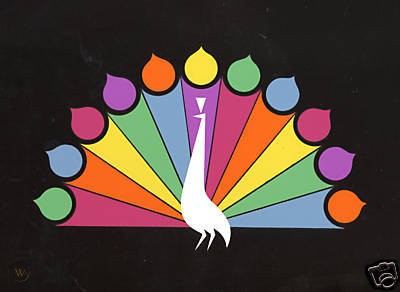 It was June 18, 1966, when then KENI-TV channel 2 (now KTUU) became the first TV station in Anchorage, or Alaska, to broadcast in color.

The first color program was “That Girl” starring Marlo Thomas in an episode titled “Don't Just Do Something; Stand There”. 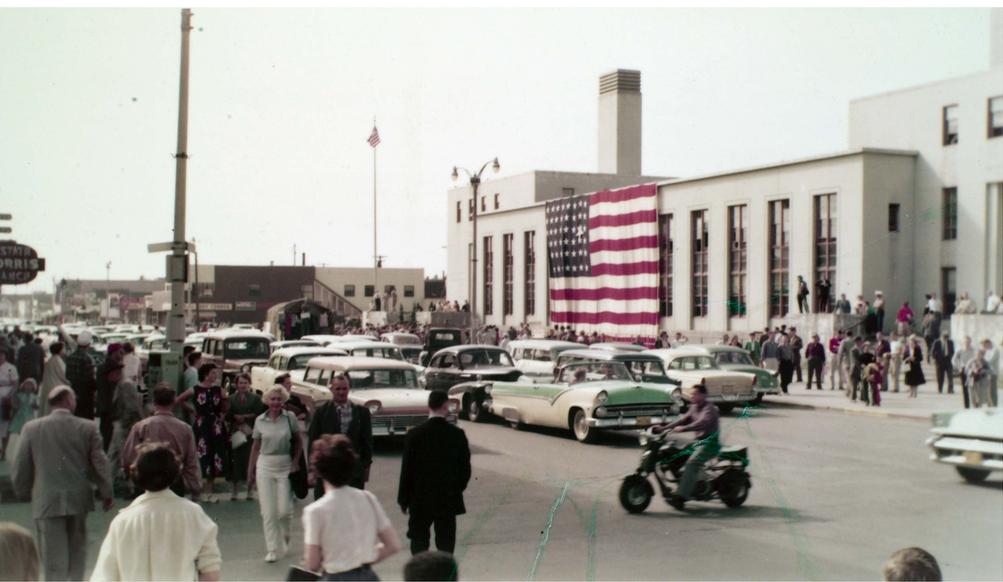 The Federal Building on 4th Avenue

On June 30, 1958, the Bill allowing Alaska to become a state, passed the United States House and Senate.

Notice the huge American flag on the side of the Federal Building in downtown Anchorage?

If you look closely, you'll see that a “49th” star was added to the flag to show the world that Alaska had become the 49th state.

To celebrate, there were parades, fireworks and a huge bonfire. Were you there?

But it wasn't until January 3, 1959, that President Dwight D. Eisenhower signed the Bill, officially making Alaska the 49th state. 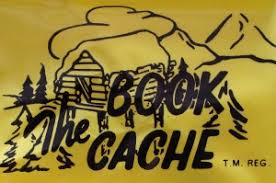 In the early 1960s, the Book Cache opened at 436 5th Avenue, where it quickly became an Anchorage favorite.

But the store didn't actually get its start at the 5th Avenue location.

Do you remember where this Anchorage icon started serving our town?